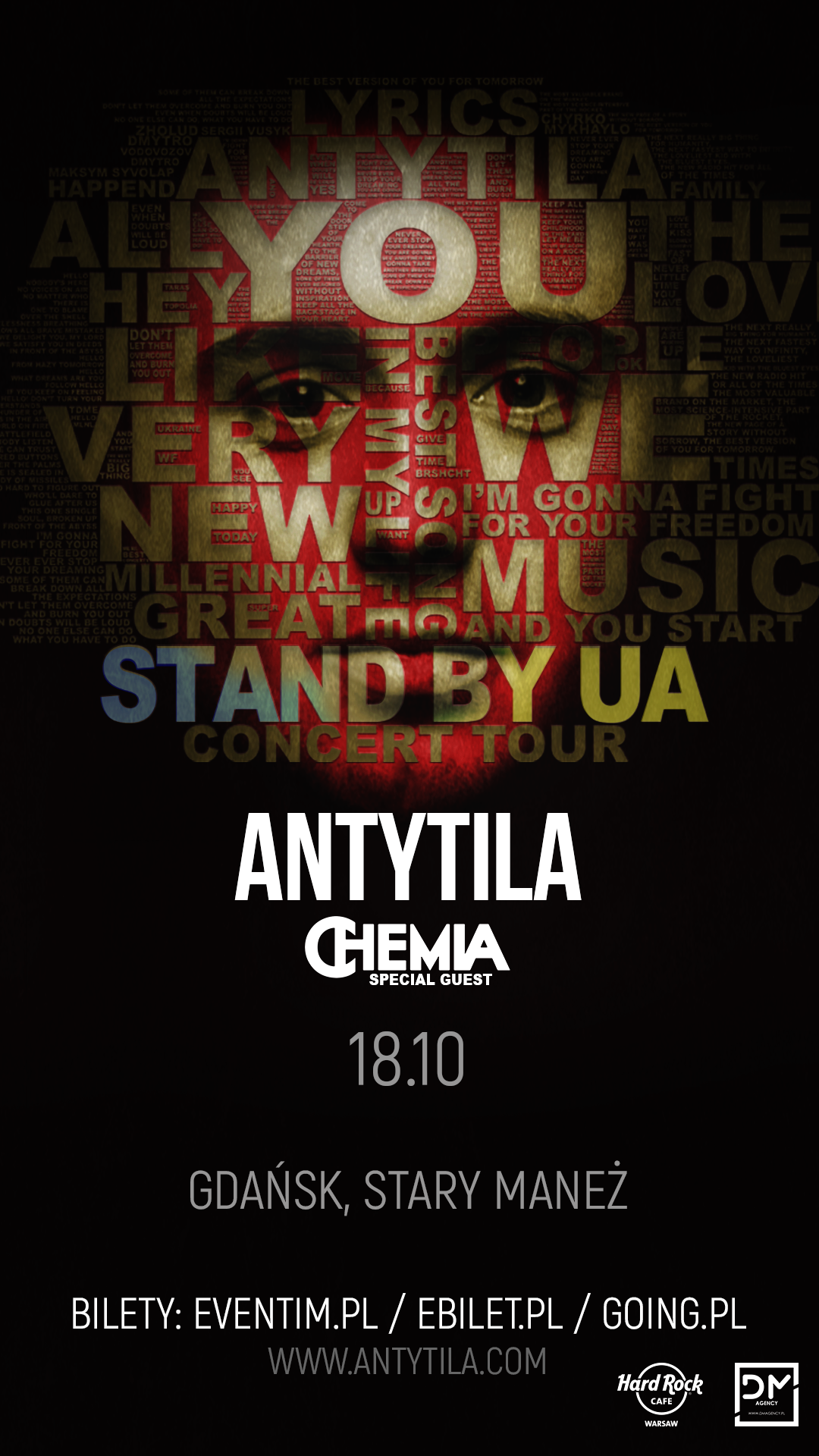 (UA) set off for a tour around Poland «Stand by UA». In its first part, the guests of the gigs in Poland are the band CHEMIA

(PL). In October, the artists are going to perform in Gdańsk, Warsaw, Gliwice, Wrocław, and Poznań.
The most important information

https://goingapp.pl/wyda…/antytila-gdansk/pazdziernik-2022
They’ve performed with Bono and The Edge from U2 in Kyiv metro, they’ve released a collab with Ed Sheeren and recently performed it for the first time live in Warsaw at Narodowy, and the last six months they’ve spent at the very frontline as riflemen and paramedics saving people’s lives.
Today ANTYTILA are setting off for their first international tour «Stand by UA» and are about to give concerts in Poland.
The musicians are bringing with them a full European level show, beloved songs having become the symbol of faith and invincibility for lots of Ukrainians and ready to perform 2Step for the first time live for their fans from all over the world as well as songs in English and Polish!
ANTYTILA were founded in 2008, in Kyiv. Their songs and videos are full of numerous metaphors, always filled with sense and beloved by a wide audience. People visit the band’s gigs by the whole families, together with children and grans coming back again and again.
ANTYTILA have covered a long way to success for years: from performing in small pubs to holding gigs at the stadiums. And in the past 5 years, the band continuously tops the charts in Ukraine.
They’ve released 7 albums, filmed 30 official videos. The premiere of the latest band’s album «MLNL» took place on February 25, 2022, on the next day after Russia’s invasion in Ukraine. Instead of the studio and TV airs, ANTYTILA presented the album to general public from their battalion’s dislocation place where they had been included as volunteer soldiers of the territorial defense of Kyiv.

YouTube: https://www.youtube.com/user/KrolikRolik/featured
Chemia has been founded by a guitarist Wojtek Balczun in 2007 in Warsaw. It keeps developing at national and international music markets for years creating rock and hard rock using unique artistic and stylistic formula. In 2015, the listeners of Antiradio marked Chemia as the band of the year, and the fans of Radio Three recognized the song «Я так тебе люблю» as the best alarm clock.
The band has performed at international festivals including Woodstock Ukrainę Festival, Sonisphere Festival, Orange Warsaw Festival. They’ve done supports for such stars as Red Hot Chilli Peppers, Guns’N’Roses and Skindred.
On April 29, the release of the newest album of the band «Something To Believe In» took place including 10 rock songs. The album’s sound producer was Andy Taylor, a guitarist and a composer known for his collabs, among which Duran Duran and The Almighty.