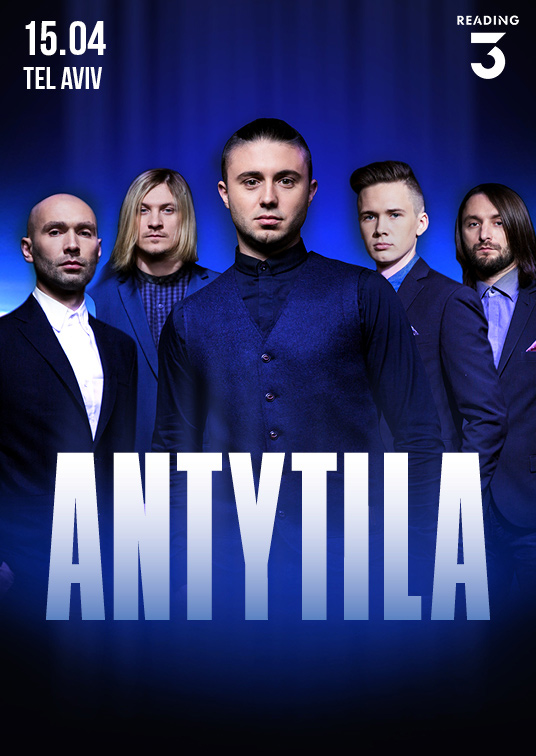 For the First Time – ANTYTILA in Israel.

Once, it was exactly Tel Aviv where we shot one of our first music videos. Exactly Israeli instructors were those we received important knowledge about paramedical aid from, and exactly the best Israeli bandages saved and go on saving our sworn brothers’ lives on the frontline.
We feel a certain piety and responsibility for a gig in a state understanding us and giving us such vital support in this war.

We are bringing our seventh studio album MLNL as well as the songs already being favorite for millions and having become the symbol of faith and hope for the Victory for people all over the world, and also quality sound and light to support and to express gratitude to Ukrainians in Israel and everyone who cares for their support, for those who miss home – to remind of it, and for everyone – to show Ukraine in songs.
The gig of the band ANTYTILA in Israel is a special show combining visual and light director’s decisions smoothly transferring from songs to the audience’s talks with Taras Topolia who uses his humor, metaphors, and personal experience to speak of love, friendship, war, and Ukraine in the world.

“Shalom, everybody! We’re inviting all Ukrainians in Israel, friends of ours and all the people who care of Ukraine to our gig. Israel is a really special country and we feel a great responsibility for our first performance there in history of our band. We’re going to sing the songs being sung today by millions with no exaggeration as well as talk of the war first-hand. There are Ukrainian groove and Ukrainian soul in our songs!», says the leader of the ANTYTILA band Taras Topolia.

The Ukrainian musicians have swapped their musical instruments for guns since the first day of full-scale invasion and started to protect Ukraine as part of a combat battalion. They took part in battles for Kharkiv oblast, which can be seen in the film produced by BBC.

Soon they sang together with Bono and The Edge from U2, released a collab song and video with Ed Sheeran, and performed together on the same stage a few months ago.

Now, the musicians put their every effort for volunteer projects of their own Charity Foundation also patronizing the children from the deceased militaries’ families of their 130th battalion of territorial defense.